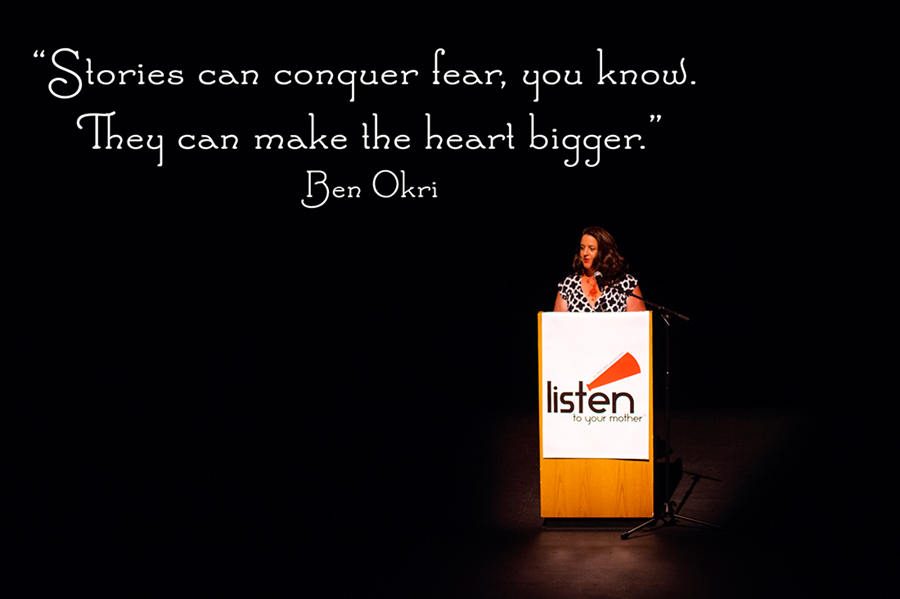 For as long as I can remember, I’ve loved stories – to read them, to tell them, to share them, to soak them up like the last bit of sauce in a delicious bowl of shrimp scampi, to store them up and keep them close for days that just need a good story.  So, several years ago, when I first heard about Listen To Your Mother, my storyteller’s heart skipped a beat.  A stage, both literal and figurative, for stories about motherhood?  I.AM.IN!

Unfortunately, in the early years, none of the Listen To Your Mother shows were even in my time zone.    Last year, I flirted with the idea of auditioning for the show in Little Rock.   I almost sent an email for sign-ups but at the last minute realized that life was too chaotic to commit to making three drives to Little Rock in three months. When they made the announcement about the 2015 show cities, I saw Baton Rouge on the list and I was almost giddy.  Baton Rouge is only four hours from my house.  Surely, I could make it that distance for practices and the performance.

The initial Baton Rouge post was November 10th, 2014.  My mother was still in the nursing home after her fall in September; she was not speaking to me yet again.  I decided since I was disowned I might as well audition for a show about motherhood – I’m sure that makes sense to someone somewhere.  Forget that fact that my life was even crazier than it was the year before; forget the fact that I had no idea what in the world I was going to submit; I just focused on the fact that I was passionate about wanting to audition.

I stalked the website and finally, finally, finally, audition details were released on January 12th, my niece Emmie’s birthday.  Since November, my mother had been released from the nursing facility and returned to her house with my ninety-year-old grandfather as her “caregiver” (side note – no one in the universe save my mother and  my grandfather thought that was a good idea) which lasted two weeks.  In those two weeks, mom made a trip to the emergency room and then the next weekend fell repeatedly and was admitted back to the hospital.  She was released from the hospital back again to the skilled nursing facility where her health and her mental status deteriorated rapidly.  At the end of December, we moved her to the facility where Steve works and realized that she probably wasn’t going to recover enough from this event to even go to an Assisted Living facility.  By the time audition details were released, I had signed papers confirming that mom was only to receive comfort care.

When I saw the LTYM Baton Rouge details, I talked to Steve about the lunacy of auditioning for a show when everything was so up in the air with mom.  He encouraged me to at least try.  So, that Friday, the 16th of January, around 2:00 p.m., I emailed Meghan, the director of the show asking if I could possibly set up an audition.  She replied back that I was crazy to drive that far three times for rehearsals and the show (not really, she just wanted to make sure I knew what was involved).  I told her that I really wanted to try this and she offered to let me Skype my interview.  I said “sign me up”.  Seven hours after I sent that email, my mom died peacefully.

I spent the next couple of weeks helping to plan her funeral and trying to get her estate set up and the probate process started (friends, that is a long story for another day).

My audition was set for 11:00 a.m. on February 7th.  I woke up that morning just before dawn with nothing to read for the audition.  I considered emailing Meghan and cancelling.  But two very different stories, based on two encounters with my mom and one with the girls in the van on the way to school, were swirling around in my head and I thought I could make one of them work.  I sat down at the computer and started to type and somehow, someway, the two stories melded together into one that I wanted to share.  I finished about 9:30 and shared it with Steve.  He cried and said it was his favorite of anything I’d ever written.

So, I auditioned.  And I waited. and waited. and waited.  Okay..it wasn’t that long.  I waited two days and then the email from Meghan was in my inbox and I was scared to open it.   The email started out thanking me for auditioning and reminding me that the show was about more than individual stories, it was about how those stories wove together to make a larger tapestry.  Right then I knew I didn’t get a spot.  My heart dropped.  I read the next line that said CONGRATULATIONS!  And, possibly for the first time ever, I was speechless.  And terrified.

Somehow, the next few weeks passed quickly and in March, we had our first group practice.  IT.WAS.AMAZING!  Meeting the other eleven women in the show and hearing their stories – I can’t even explain it.  Just know that being a part of this group of storytellers changed me forever.

Unfortunately, sadness has mixed equally with joy this year and on April 16th, two days before our second rehearsal, my grandmother died (If you’re keeping track, yes, that was exactly three months to the day after my mother died)   I wondered if I would be able to read my story on stage so close to Mother’s Day.  Then, I realized that what better way to celebrate their memories than to share my story and honestly, it helped to distract me a little (or  a lot). 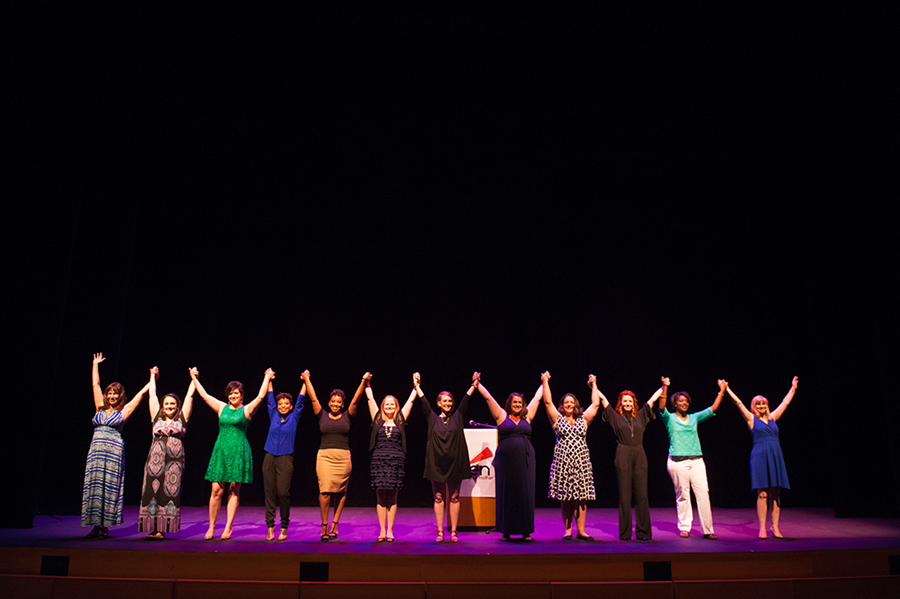 So, on May 3rd at the Manship Theatre in Baton Rouge with my husband and my daughters and my sister and my brother-in-law and my nieces sitting in the audience, I took the stage with eleven other incredibly gifted mothers, and read my piece called Labels (click here if you’d like to read it)

I will never be the same.  I did something that day that was for me.  Even though my piece was about being a mother and a daughter, I read it for me, not for my mom and not for Gracie and not for Abigail.  I did it to share my story and if you never listen to anything I’ve ever said or will say, listen to this:  share.your.story.