Until the Coast is Clear

Until The Coast Is Clear

If the Deepwater Horizon Oil spill disaster had happened on the Jersey shore, we might have had Bruce Springsteen, full of angst and outrage.  Had it happened on the shores of Lake Michigan, Kanye West might have come and given a repeat of his infamous performance at a certain hurricane relief concert.  If the oil was washing up on the coast of Oahu, we might have had Jack Johnson, with his zen-like surfer mellowness.  But, the Deepwater disaster occurred on the Gulf Coast, so we got Jimmy Buffett, performing a free concert to lift the hopes and hearts of the people of a beleaguered coastline.  And while I would have been over the moon to see either The Boss or Jack Johnson (and there’s hope for that…there’s a rumor Jack Johnson may be here for a concert later this summer), seeing Jimmy Buffet, live on the beach – well that, my friends, was perfection.  And, speaking for one measly Gulf Coast resident, my heart and hopes are lifted and my determination to do what I can to help restore this little piece of land to the paradise it was 87 days ago is cemented.

Jimmy Buffett’s Concert for the Coast was free.  And immensely popular.  The 35,000 tickets were gone in less than 10 minutes.  Think about that….35,000 in 600 seconds.  I didn’t get a ticket and, I probably couldn’t have gone anyway….Steve has Bible Study on Thursday nights and babysitters are somewhat scarce in the summer.  I resolved myself to watching the concert on TV.  Then, two amazing things happened.  My friend Allison called to tell me she had an extra ticket.  And, then, they postponed the concert to last Sunday night because of weather.  So, I was one of the 35,000 screaming fans crammed into a 1/4 mile area, singing along to Pascagoula Run and Son of a son of a Sailor with my friends Lara, Laura, and Allison. 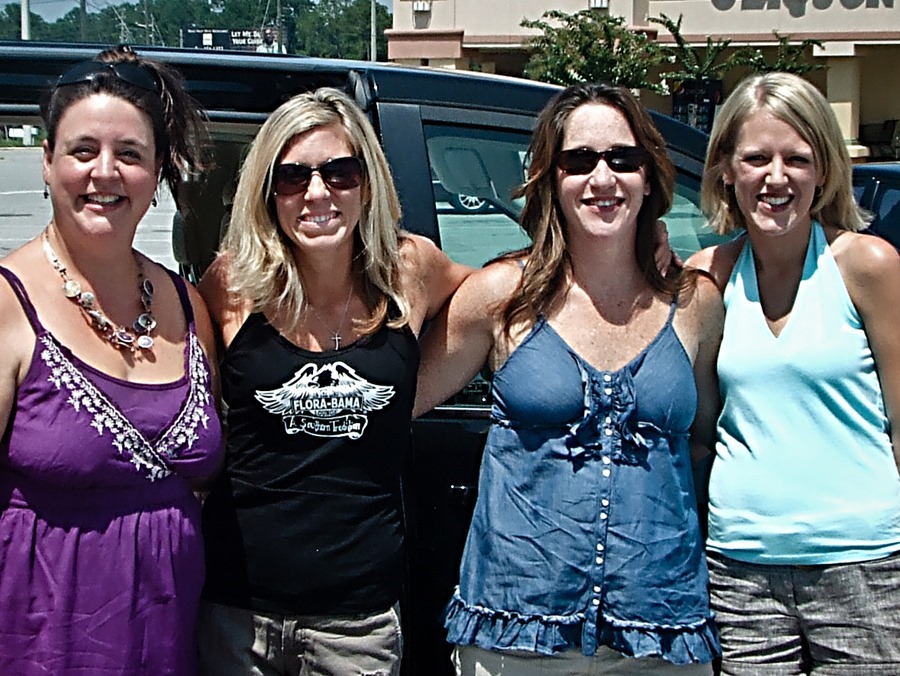 The weather was incredibly hot, but beautiful.  There was a warm breeze without a hint of oil and for four hours, I forgot about the skimmer boats, and the helicopter oil-spotting flyovers and just enjoyed an evening at the beach. 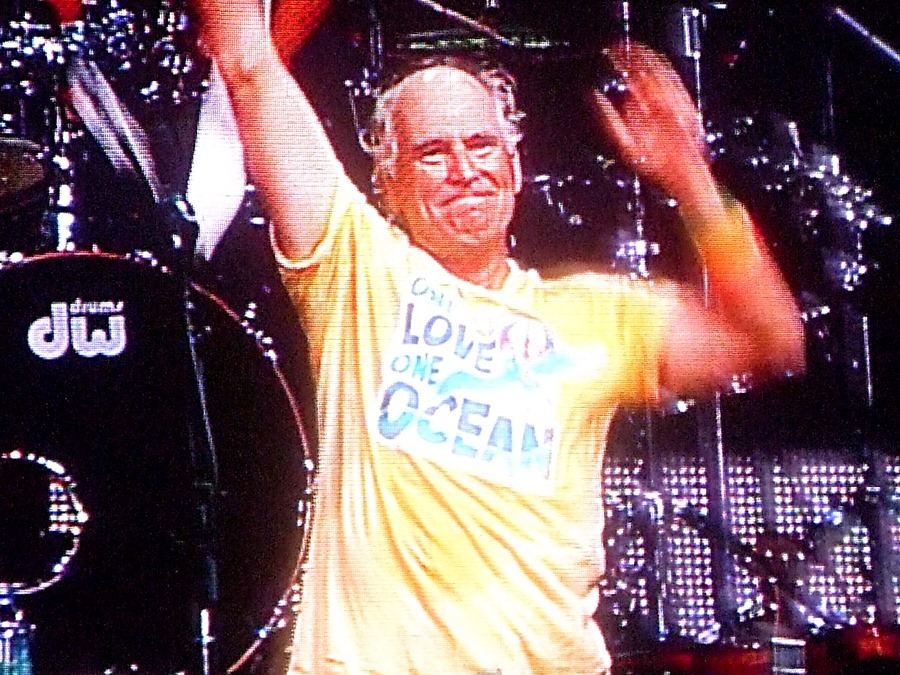 That is, until Jimmy sang a modified version of his song Until The Coast is Clear (click here to see a video of it from the concert).  Then, it was hard to see through my tears.  And, I wasn’t alone….my friend beside me had tears in her eyes, and the 70-year-old man in front of us did as well.  I imagine if you’ve spent any time on this coast, it was difficult to keep tears from welling up.

Now, 35,000 people crammed into 1/4 mile of beach is a virtual ocean of people.  And, in   every ocean, a little flotsam has to float to the top.  Unfortunately for us, the flotsam in this sea of humanity was standing right behind us.

Do you see the girl in the bottom left of this picture? 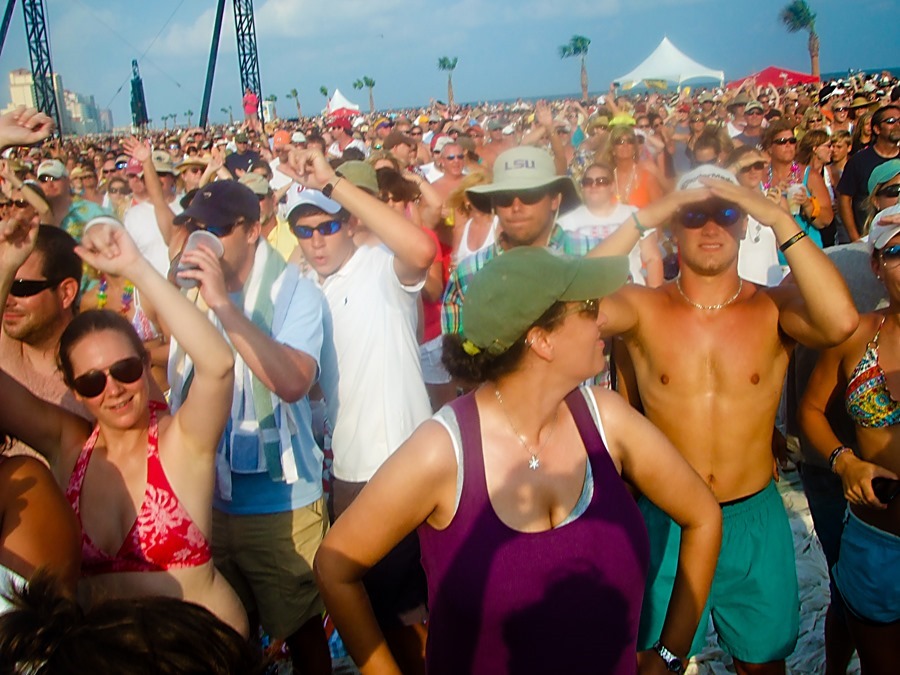 Well, she was with the guy standing behind her right shoulder.  And let’s just say that he was thoroughly enjoying the Land Shark Lager that was flowing freely.  And let’s just say that maybe he didn’t know hold to hold his beer.  And let’s just give him the benefit of the doubt and assume that it was the beer that turned him into a total jerk.  Because calling him a jerk is being kind.  He stumbled.  He tripped.  He fell into me.  He fell into Laura.  He spilled beer on Laura.  He hit Laura in the head, not very gently.  And, when my kind sweet friend had had enough, she let him know.  And then he started cussing. Lovely, just lovely.  And he was equally as obnoxious to his girlfriend.  But, when I finally turned around and told her that she needed to get him to sit down before he hurt someone, she just glared at me and I could tell she was thinking, “you old stick-in-the-mud – who are you to tell us what to do?  What do you know?” and I could almost hear the scorn…”I’ll never be like you…never be where you are…”

And, my 41-year-old self wanted to say her 20-something self, I do know.  I do….I know what it feels like to be out with a drunk at a crowded place and feel torn between embarrassment and wanting to defend the guy you think is the love of your life.  I do know how it feels to have a perfectly good evening ruined because someone drank too much.  I know how it feels to be insulted and tormented and just plain shamed.  And, my hope for you, dear 20-something girl in the red bikini at the Buffett concert, is that at some point in your life, you find yourself out with friends that you love while your amazing husband is at home watching your beloved children so you can enjoy putting your feet in the sand, listening to one of your musical heroes with tears in your eyes as you realize the place you live is more than just a zip code – it’s a part of your soul…Yes, sweet girl, I hope that one day you’re exactly where I am.   Because where I am, is in the town that I love, surrounded by people who I love and who love me.  And that’s exactly where I plan to be until (and long after) the coast is clear…

« My Little MarilynWhere’s My Mummy? »