Posted in People We Love,Real Life 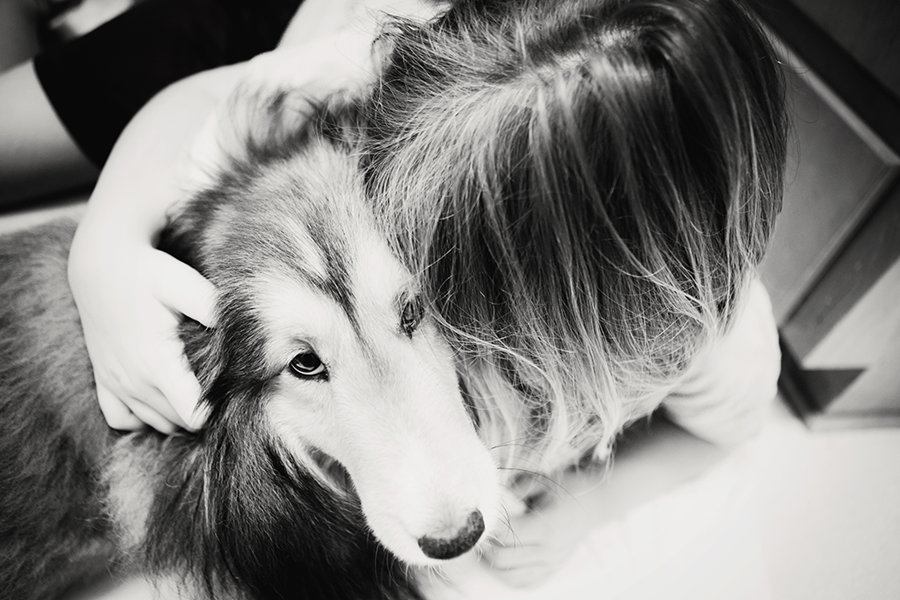 I kept thinking all through last week’s heartbreak and struggles (mom in hospital, Ben taken off lie support, Ben dying, the flood) that maybe we were due for a little bit of break.  That just wasn’t meant to be.  Our sheltie, Ella Bella, had an on-again, off-again appetite for a couple of weeks. I put it off to a lot of things – company, bad weather, me being upset (she was sensitive to a lot of things, particularly my moods – she always knew when I was upset and would stay at my feet until she was sure I was okay.  The night of the flood, she stayed up all night with me, walking back and forth between the couch where I was awake and our bedroom where Steve, Gracie & Abigail were sleeping).  This Wednesday, though, she started not eating or drinking anything, even her “treat” canned food that I’d bought for the first time in her life to bribe her to eat.  On Thursday, we called the vet and Steve took her in to the appointment that afternoon.  I thought that maybe she’d hurt her back again – she did that a few years ago throwing herself at the fence to bark at opossums.  She took some pain medication for a couple of days and was back to herself quickly.  At least that’s what I was telling myself I thought that’s what was wrong.  The truth is, I had a scary feeling that it was something more than that.

Steve sent a text from the office after he talked to the vet telling me that the doctor suspected either a autoimmune disease or a swift-growing cancer.  Basically, she wasn’t producing red blood cells. They gave her a heavy dose of steroid and a heavy dose of antibiotics.  They sent her home with some more medicine and asked to see her back the next morning to recheck her blood levels.  If they were better, we would proceed with some more treatment.  If they weren’t much better, well, then, we would be looking at something incurable and that we might have to say goodbye to our sweet girl in a few weeks.  Ben’s funeral was scheduled for Saturday; we decided to wait until after the funeral to tell the girls anything.

The next morning, Steve took her to the vet at 8:00 a.m. and then came home and picked me up so we could go to school and watch the girls perform in their May Day dances.  On the way to school, the vet called. Ella Bella’s blood work wasn’t any better. It was much worse.  We asked the doctor if we could come in and talk to her and she kindly told us that she was there whenever we wanted to come.  Steve explained that we need to watch the girls’ program and that we’d be there in about an hour.

I sat in the car and cried an ugly cry.  And, then, somehow, I pulled myself together and walked onto the field and watched my sweet girls dance their hearts out with their classmates.  Once they finished we gave them hugs and sent them back to their classrooms.  They both asked to be checked out of school (something that’s pretty common on May Day – kids get checked out and spend the rest of the day playing or enjoying the afternoon at the beach).  We told them no but, miraculously, neither of them seemed overly disappointed.

Steve & I went and talked to the vet and discussed our options with her.  There weren’t many and none of them were pleasant.  We could have tried a blood transfusion, but the odds of her surviving the transfusion weren’t great and the odds that it would be successful were even less.  We explained that we were going to be out of town for Steve’s brother’s funeral over the weekend and that we didn’t want to leave Ella Bella home alone (I think what went left unsaid was that we were afraid that she would die while we were gone).  The vet offered to let her stay there over the weekend, but warned us that she was a very, very sick dog and there was a better than good chance that she wouldn’t make it through the weekend.  The vet also explained to us that the lack of red blood cells were quickly going to make it difficult for her to breathe.  It would be painful for her and agonizing for the girls to see.  That led us to our last option – going ahead and putting her to sleep today.  I asked the vet, with tears spilling down my cheeks and more than a little choke in my voice, if she felt we were jumping the gun by making a decision today.  She said, as kindly as possible that we weren’t and that we were doing the kindest thing we could do for Ella Bella.

We asked if it would be okay if we brought the girls to the office to spend a few minutes with Ella Bella and the vet encouraged us to do that.  Steve & I decided that we would all four spend a few minutes with her and then he and the girls would go to the waiting room and I’d stay with her until the end.  We left the vet’s office and headed back up to school to check the girls out.  That is an experience I don’t ever wish to repeat.  They were so exited to be checked out, thinking that we were going to go and do something fun together as a family.  When we got in the car, we broke the news to them and I watched my daughters’ faces and hearts crumble.  It was awful.

Back at the vet, we spent about twenty minutes together with Ella Bella.  I am so thankful that I had my camera with me for the May Day celebration so I was able to get some photos of our puppy.  Much too soon, it was time for the girls and Steve to head out of the room.  I sat on the floor and held Ella’s head in my lap as the doctor gave her the medicine.  My sweet girl looked at me the whole time and I talked to her calmly even though tears were spilling out of my eyes faster than I would wipe them away.  And, then, she was gone.

Steve brought us home and then went back to get her body and we buried her in the back yard.  Each of the girls said something about her and we placed a wooden cross made from sticks and a couple of flowers to mark her place.

We headed to lunch at Lillian’s – no one felt like cooking and it seemed like it would be a good idea to get out of the house.  It was definitely quieter than our usual lunches out.  When we got back, Abigail and Gracie went down to play at a friend’s house – the distraction was good for them.

I can’t even begin to say how much I’m going to miss Ella Bella.  When the girls are at school, she is my constant companion.  When I’m up late working, she is always there, right under my feet, keeping me company.  When the girls and I travel in the summer, she is home with Steve – I can’t imagine how empty the house is going to feel for him this year.  The only thing that gives me comfort right now is knowing, without a doubt, that she knew, right until the very end, how very much she was loved.